skip to main | skip to sidebar

Here's the buzz on the surgery... and my pergola 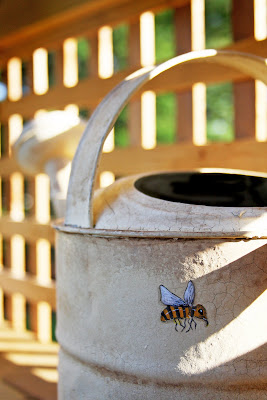 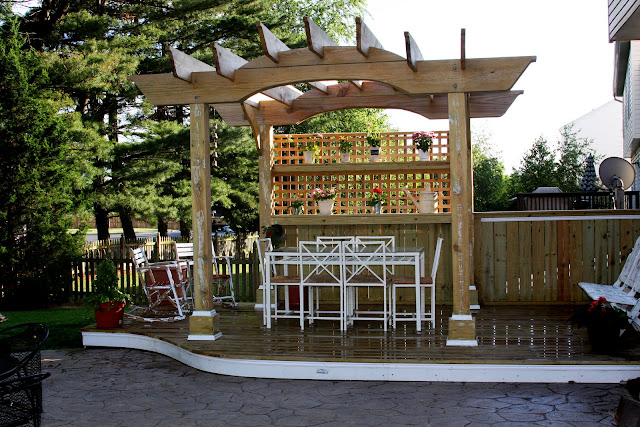 First I'll tell you about my Pergola/Patio Sanctuary. You may recall, last year I had a stand at the Harford County Farm Fair. When I was asked to be at the fair and committed, I didn't know what misfortune was about to behold my back. So instead of buying a flimsy tent like thing, my husband, father and our friend Curt (from http://www.wadecontractors.net ~ he's about to get a new site that will be awesome btw) built this pergola in anticipation of extending our patio. We've been wanting one for a while so this worked out perfectly. It's still not finished, the structural part will be stained white, the lattice on the back will not and the decking will not either but the back wall will be. We really want to go with a loved-worn look with the entire thing, including the patio furniture. Those rockers were actually my husband's grandparents and we are going to strip them and paint them white with black seats. We also have a black wrought iron table on the patio area (just to the left in the photos) . My pot collection on the shelves will eventually be an all white on white theme (with various shades of white pots). The watering can was my mother in law's uncle's. I painted and crackled it several years back and painted a bumble bee (with legs full of pollen, if you click the picture you can enlarge it and see) an ant and several lady bugs. OHHHH and I wanted to show you my SAP BUCKET IDEA. In the last photo (you may have to click to enlarge) you can see an antique sap bucket that my husband put a pot of geraniums in (He planted all my flowers this year...he's such a good guy!). Well, the pot comes out and we fill the bucket with ice and it's a WINE CHILLER!!!! Cool huh? I occasionally have moments of brilliance even on my meds! 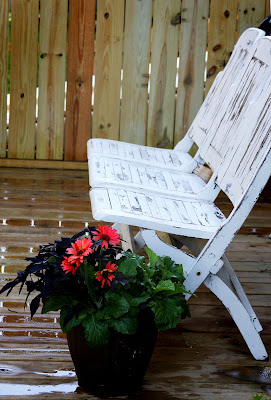 several weeks even semi sane if I couldn't have spent a large chunk of it outside. I have spent hours sleeping and reading on that white bench! (speaking of reading, some weeks I've gone through 5 books in 7 days!). The other thing that kept me sane was my friends and family stopping by constantly. More often than not, it felt like a party! Although it was like I was the lone drunk there! (Because of the medication, lol)
Here's some details of the surgery, so if you want to stop reading you can, although I won't get gory on you.
As you probably know, I had a lumbar fusion on L3-4 with 2 types of instrumentation. The type of fusion I had uses titanium rods and something called pedicules instead of screws. They are like smaller rods that are inserted through holes in the vertebrae (I'm assuming these holes are drilled) and then have a cap like end put on. The pedicules hold the rods onto(into) the vertebrae and I have these rods on both sides of my spine in that lumbar area. Prior to using the instrumentation, they grind off bone from the vertebrae top and bottom and then they mix the ground bone with some type of polymer and a bone stimulating hormone to make a paste. The dried out and nasty old real disc was removed. The replacement disc 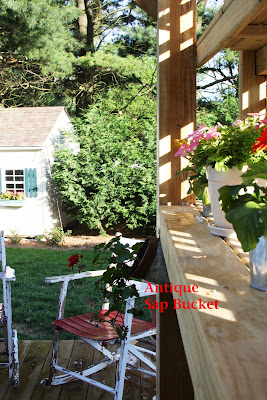 has a hole in the middle like a donut. So they slather some of the bone putty stuff they made in the middle, slide the new "disc" in between the vertebrae and than slather more bone putty all around it. The hope with a fusion is that the two vertebrae and the replacement disc and bone putty all FUSE into one big 'ole chunk. This would take care of my disc issue and the spondylosis (arthritis of the spine) of that area all at once because there is no more joint in the two vertebrae. Clear as mud huh?
My surgery was estimated at 4 hours but it took about 5 1/2 because after my neurosurgeon got in there, there was a scar tissue party going on. The scar tissue was apparently all over the place, winding it self around nerves and sending nerves places they shouldn't go and just causing a bunch of raucous! Prior to the surgery my big toe, across my foot and up my calf was numb and weak even after 100 episodes of physical therapy but there was hope it would get better. Now, because of the surgery I'm numb up to my left chubby buttock in a 4-5 inch strip. THAT should go away although the chances for below the knee have now diminished. Oh well. I just occasionally cut myself shaving! Well I'm not really shaving yet (Peyton and Callie do it for me) 'cause I can't bend yet. AND I only ended up with 27 staples and 2 incisions...not bad! :-) When I was moved to my room, I had this pump thingy that I could press every 8 minutes and it would dose me with something...I don't remember what it was. OHHH um I think it was delauted or something like that. Well, lucky for me my clock was broken in the room. Matt even replaced the batteries and it still didn't work. The nurses kept reminding me to watch the clock (duh, it's broken people) and hit the button every 8 minutes So needless to say I pumped the heck out of that pump because I never knew when it would work. I really think that's kinda a crappy method of pain relief because sometimes you'd doze off and when you'd wake up the pain would be like a greedy gnawing monster and you'd take forever to bash him away with your every 8 minute squirts of happy juice.
The day after my surgery was VERY memorable because Stephanie and Lisa came to visit me. I totally wish I had a picture of their faces for the entire time they sat with me. If I hadn't been on pain meds (real by than, not that STUPID pump thing) their looks probably would have scared the crap outta me. They both looked like they thought I was dying so I'm guessing I probably should have done my hair and makeup or tried some other method of beautifying myself! Actually, they've said they just didn't expect what they saw. Ummm. I didn't expect this surgery to be like that either. I thought it would only be a tad worse than the other two I had. I think the tip off should have been the fact that I'd be hospitalized for up to 5 days and that they recommended that I get a walker, a shower seat and a potty lift during my spine class. I walked out of that class thinking that recommendation was for the 70 year old patients not me. WRONG! LOL
All in all, everyday is slightly better than the one before. Well usually. Except rainy days do a NUMBER on me.
If you've made it this far, you deserve a medal. Or perhaps you must be really bored or at work where anything is better than what you should be doing, right?

Read more: http://www.mylivesignature.com/wizard2_2.php#ixzz0lYwMTJ55
Posted by Robyn at 6:54 AM 2 comments

I'm Back! Pun intended! Random thoughts and tangents ahead! 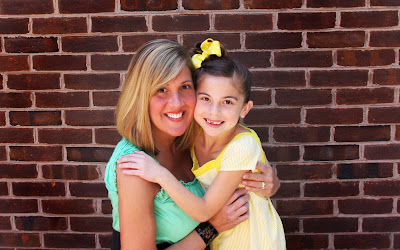 So I'll be adding to this blog post throughout the day because I can't sit at the computer very long and I'm also trying to edit photos for a few friends when I can as well. I also have SO much to tell you and get off my back (again, the bad pun). I've missed blogging and I hope my friends and family have updated and entertained you as well! LOL We'll get to that later.

Yesterday was the first REAL day I went out in public for Peyton's Authors Tea. I could never have missed that! She did so awesome and spoke about why friends are important. BOY, do I ever know that (family too) but I'll be back later about my friends. Anyway, we were so proud of her! I wasn't supposed to go out in public for a month because of potentially catching, meningitis, sepsis or a staph infection. Sounds fun, huh? It's actually a month tomorrow, but who's counting? 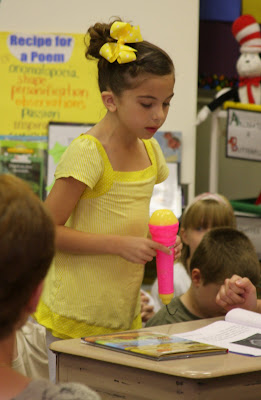 on bed-rest most of the time since the surgery. Your first thought is that I probably was in an accident in a rusty old cab that was flying down alley-ways during my exciting and exotic vacation in Bora Bora. Hence, the tan. Actually, in order to stave off extreme boredom, I've been spending oodles of my time laying/sleeping on a bench on my patio. Being outside is SO much better than being stuck inside although my husband was super-sweet enough to put a bed up in the family room for me as you probably saw a few posts back when Tina and Brandy dressed me up during one of my many medication induced hazes. If you haven't seen it, it's worth a look-see. They did it quickly while Stephie was on one of my MILLION Robyn errand runs that she has done. Stephie is my mother hen/nurse/best bud/complaint line/reading buddy/Target shopping twin, so they were afraid she'd beat them over the head with my body pillow while in fear for my safety.

Last but certainly not least are the neighbors/friends that made us delicious dinners and always called to see if we needed anything! My wonderful and giving chefs were: Julie, Cindy, Jen and Debbie! THANKS LADIES!

Read more: http://www.mylivesignature.com/wizard2_2.php#ixzz0lYwMTJ55
Posted by Robyn at 8:12 AM 1 comments

I know some of these pics are fun and cute but PLEASE don't copy them with out giving source information. They are copyright protected and you know what? Taking them would be illegal...wouldn't that make your Momma real sad? If you want to pin something on Pinterest, feel free! If you want something for another purpose, just email and ask, okay? Cool!

ONE by ONE until there are NONE!

What's all the BUZZ about?